A search for water in the deserts of Mongolia. 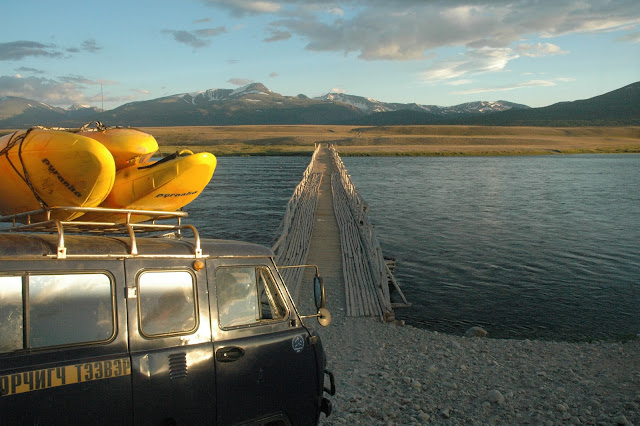 Dry dusty and hot, another day, another drive in Mongolia. We had crossed the border from Russia, the roads had turned from tarmac to sand and the scowls on people’s faces into smiles. The people of the Altai region of Mongolia could not have been more friendly and welcoming. Yet the long drives in the desert and hikes up mountains chasing streams to find nothing of worth, was beginning to wear a bit thin. "All the rivers are empty…driest wet season in 18 years…drought," all words a white water kayaker doesn’t want to hear, the rivers previously salivated over on google earth where now dry. Time was running out, so we decide on a change of plan, we pick out another mountainous area with glaciers that look big enough to sustain something of note… another two day drive and our trucks begin to ford a river… 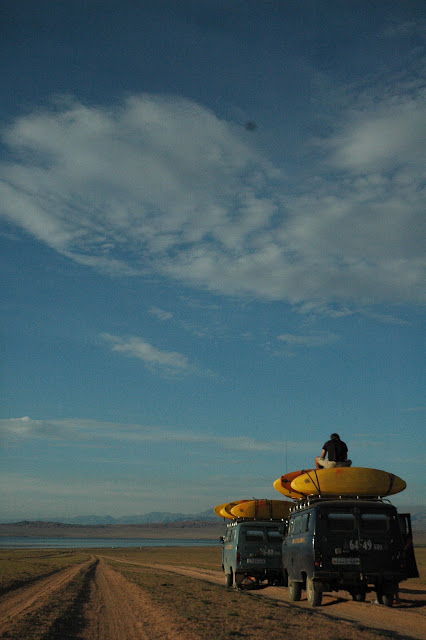 r
"Hang on, we’re crossing a river... hang on, there’s snow covered mountains up there... hold the phone!" Change of plan, we communicate through Sarol the interpreter to some locals, locals who mention "steep gorge…waterfall," words every white water kayaker wants to hear, we don’t dare to believe that were in business. We drive up a torturous rocky ruin of a road, as far into the hills as we can get and start to hike in. one group to the middle section of the river one to the upper. We re-convene five hours later; breathless we share our find. A picture perfect steep creek, bedrock slides, falls and crystal clear aquamarine water. Big pasta dinner is devoured and we pack our gear ready for the walk in in the morning. Everyone’s buzzing and this is one 5 am start that isn’t hard to get up for. 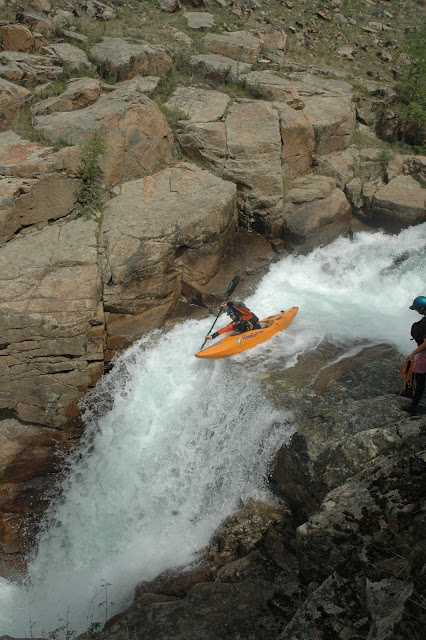 The walk in is tough but the rewards are there, we scope out the upper first, one big slide is runnable but the other big fall has a sketchy landing and we’re way out here.I for one was not up for an injury that could have major consequences. The next fall however is Mecca…a 12-15 metre triple combo; small top drop with a super sticky hole; central crux drop with a tiny landing/lead in to the final fall, a 6 metre no brainer into a big deep pool. Who’s going to probe? Dave our youngest member steps up, looks good on the lead-in but lets just say hearts are in mouths, he rolls up fine…phew! Graham pops on his deck and nails it, now it’s my turn. I splash my face, pop on my deck and build up speed for the 1st drop, through the hole fine but i'm pushed left, mouth goes dry but I stick in a big left hand boof stroke, fire off it and land perfect, keeping speed into the last drop. AMAZING…styled a wonderful waterfall, in the middle of nowhere, on my first first descent, and there is more to come…good, good, the best times!
A full days boating on a stylish creek including another decent fall and an s-bend leading into a ledge drop boof finds us back at the trucks, wild horses crossing the river in front of us as the sun goes down, what a day. It’s not the end either the river continues with another day of cruisy read and run grade 3 and 4 in a steep sided spectacular red walled canyon.
A victory for perseverance, and an incredible experience in wonderful Mongolia. A river we would never have found without the help and enthusiasm of the amazing nomadic people we met in the mountains.
An extract from Sean's Adventures on The British Universities 2007 ‘Four Borders’ Kayak Expedition.
Posted by the big blue tree at 01:00