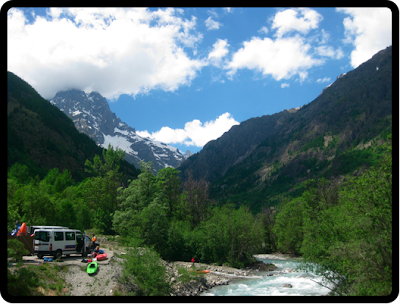 The other week I ventured to France’s Southern Alps for some warm whitewater paddling in the sun. This was my first trip paddling out of the UK. I learnt a lot! The first thing I noticed about the rivers compared to Scotland was the speed. In the fast flowing melt-water I realised I had to be more on the ball with making eddies, and that if anyone swam there would be some hard work chase boating. I won’t deny that this un-nerved me, but I was brimming with excitement for what the next fortnight had to offer.

We started easy to help build confidence and comfort in these Alpine rivers. Our first day involved eddy practice on Les Argentierre’s slalom course. The following day we paddled the lower Durance section known as “The Sunshine Run”. Many swims indicated how we were not used to this type of paddling.  We had an epic on the Rabioux wave, where about half the team were spat out the boils without their boats. Despite some frights, we had to smile: it wouldn’t be a student trip without some carnage!

Other rivers we explored included the lower Guil, the lower Claree, the upper Durance and some of the more experience tested their ability on the Gyr. Personally the lower Guil was my favourite, as it wound round the countryside displaying beautiful patchy snowy mountains, steep sided cliffs with waterfalls and tree-covered banks. The river itself was bouncy and provided plenty of eddy practice.

After two weeks of paddling, and enjoying a slower pace to life with a few beers always awaiting us at the end of the day, it’s a wonderful feeling to look back and reflect on the experience. Some lessons were learned and it feels great to see and feel how my paddling has improved over the holiday. My thanks go out to Sam and Sandy, who organised the big adventure, and everyone who pulled me out me when I needed a hand!
Rachael x 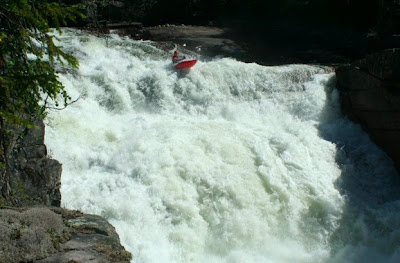 Crossing the border to Norway was amazing; we had finally arrived and were immediately staring out of the minibus to tree covered hills and crystal clear lakes. This made a great change to the flat, dull farmland of Denmark and Southern Sweden that we had travelled through. It is easy to see where they get their myths of trolls that live in these dense pine forests. 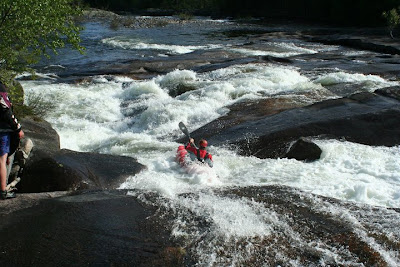 The first few days we spent in Telemark, a region in Southern Norway, where we got used to Norwegian white water. It is just huge slides or massive drops and then once you did one, another horizon line was less than 50 yards away, waiting for you. The only other boaters about were some Germans who were very efficient at getting down rapids, but it turned out they portaged more than us! 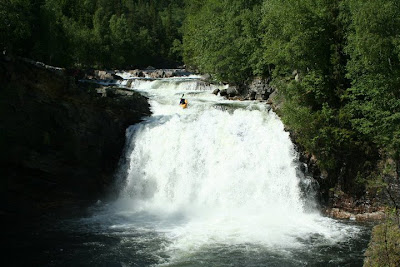 Wild camping every night, cooking on fires and not really having the opportunity to wash, meant we were soon pretty smelly. It was worth it though, as we always managed to wake up to incredible views of the stunning norwegian country.
With the water levels dropping in Telemark we moved onto the Zambezi section of the Numdalslagen. Just like the real Zambezi this is a high volume river with no rocks and some big holes. Somehow though, we still managed to hit the only rocks in the whole river and this resulted in Anne breaking her foot and me snapping my paddle and pinning my boat. Whoops. The next day we spent around the hospital in Lillehammer with Sam and Dom entertaining themselves with an Ice Cream eating contest (Sam won), while Anne got an x-ray. With her foot put in a cast we drove to Oslo airport so she could head home early. 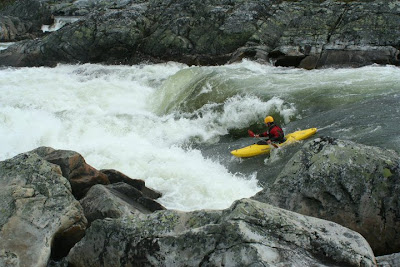 We then moved further North to the Sjoa/ Otta region, stopping regularly at Statoil on the way which has a super deal where you buy a mug and then you get a free tea or coffee whenever you visit. After hearing every kayaker saying what a wonderful boating place Sjoa is, I was keen to see it. But it turns out the town is a couple of houses and a lot of wooden trolls. The boating was still amazing though and the Amot gorge turned out to be a favourite. We spent a couple more days in the area, doing the classics and enjoying the sun. However, Will hurt his shoulder and had to stop. Luckily he only had a couple days left until he had to head back home so no major drama.
Our final week was spent in Voss just before the Extreme Sports week was about to begin. The area was packed with boaters and this made an abrupt change to being the only ones on the water. But Voss was a cool town with some cool rivers. Some just a wee bit too scary for our liking, (e.g. ‘double drop’ where we watched some guy break his bum,) to others that were quality including a team run down the ‘lake to lake’ rapid. 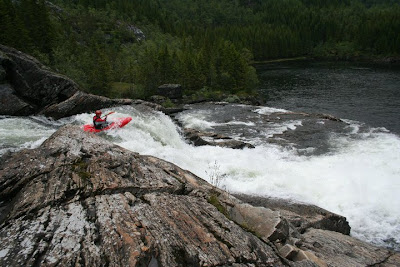 We then turn our attention homeward and after a long drive made it back to a much anticipated comfy bed and a warm shower.
On our trip we managed to break 1 boat, split another boat, dent several boats, break 2 sets of paddles, lose 3 sets of splits and brake a foot. It was awesome!
Sandy x
A big thanks to www.levelsix.com for their support. 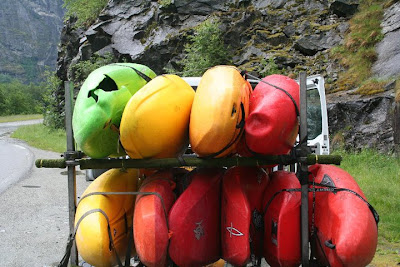