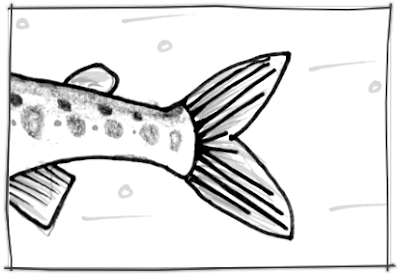 “Oi, yer disturbing the fish!” shouted the irate fisherman from the riverbank as a loud swarm of colourful kayakers bounced and scraped their way past, through and over the rocks and pebbles of the shallow river. They ignored him and bounced on round the bend... once out sight they giggled and laughed at the red faced man in waders, flicking his rod about in frustration. “Disturbing the fish!? Yeah like yanking them out by by a sharp hook in their mouth doesn’t disturb them!’’ a few quipped sarcastically.

Well... Here is a story about Steven and Susan the Salmon who were also swimming about the river that day...


Steven had just made it back home to his birthplace after a long swim from the North Atlantic where he had spent his gap year ‘finding himself’ (apparently) but had mostly spent his time eating a lot of herring and sand eels until now he was quite fat. Steve was born out of one of a few thousand little red eggs deposited by his mother in a clearing of pebbles known as a redd. Through his life Steve went through a quite a few phases, before growing up to be the mature adult Salmon he is today.


His first phase was the Alevin stage. During this phase, he stayed in the Redd hiding from bigger fish that might eat him. Him and his siblings lived off the the remaining nutrients in his yolk sack. During this stage, Steve developed some cool new gills and became an active hunter catching little bits of floating vegetation. Three weeks after hatching he had reached the adventurous Fry stage and escaped the breeding ground in search of better tasting food and danger...


Steven soon got fed up of being a small fry being picked on and almost eaten by bigger fishes and thought it was time to develop the ability to live in salt water (Parr stage) so he could leave the river and go off pirating around the high seas. During these early days Steve and his little Atlantic salmon friends were very susceptible to predation. Half of his brothers and sisters were eaten by trout, and most of his other ones were caught by other fish and birds. It was time to get out of there and see the world. So that summer, as a young Smolt, Steve headed out with his other mates traveling about the Atlantic ocean, all the way up to greenland and other far away places.


About a year later Steve became bored of his adventures and thought it was a bout time to come home chat up a lovely lady salmon with his epic tales of sand eel hunting, seabird dodging and swimming away from Sharks! Perhaps time to think about starting a family of his own maybe. So he began an epic mission back home! It was a lot harder than when he left, he had to swim up the rapids this time, but he got there eventually, and headed for the the nice gravel beds where the water was nice and steady and chilled out cruising about checking out the girl salmon he had known as a smolt. They had grown up a bit too it seems... especially that Susan Salmon!


After plucking up the courage, Steve swam over and asked her how she was, took her for a bit of a dance about, one thing led to another, he ended up going back to her place, she popped a load of eggs everywhere while he ‘fertilized’ them if you know what I mean. Aye! Anyway after their frolicking about in the Redd they were both totally knackered, especially after their long epic home in the first place, and they hadn’t eaten a thing for weeks! So they both drifted off downstream a bit worse for wear, in search of a much needed drowning fly or two.


Steve died a few days later, he was eaten by an otter. Susan followed soon after from a broken heart and total exhaustion. But remember... their little red eggs were still in the Redd that they had cleared! Being bounced gently by the current, the little embryos inside growing slowly bigger by the day.


A few months later, on a nice, sunny day, when the river was flowing nice and low, the eggs began to pop and little bright eyed Alevins began to appear and swim about the gravel. Lots of little baby Steves and Susans!


Suddenly out of nowhere a bright green mass of plastic, flies down on them from the surface and crushes them all to smithereens!!!


All Content Copyright Ben McKeown
Posted by the big blue tree at 12:49