Just another big day in Norway 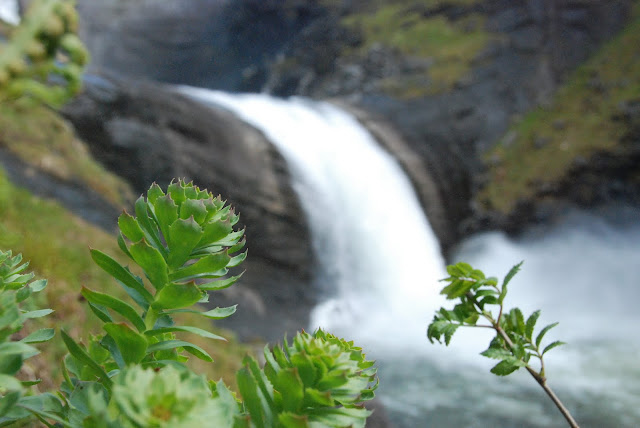 After arriving in Norway we discovered that our favourite runs in Telemark were a wee bit low due to a poor Snowpack in the area this winter. But for old times' sake we did have a quick blast on the Mår Homerun to wake us up after our two days of non stop driving in Eoghain's empty-red-bull-can-riddled, power-steering-fluid-leaking, police-magnet, stereo-less estate!

So, the next day after a cool nights sleep up on the high snowy plateau of the Hardangervidda National park we jumped back in the car and drove a little further to the town of Voss, where we found 'plenty' of water. 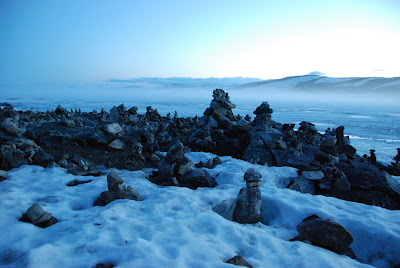 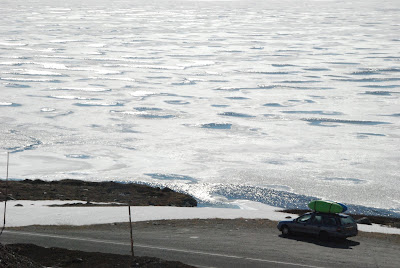 As soon as we got into Voss we made straight for the Raundalselvi, and hopped on a very bouncy playrun in the sunshine. The steep waves, racing flows and grabby holes certainly got the heart rate up, especially follwing our pretty lacking UK paddling season this winter. As ever on Norwegian rivers it was a relief to make it off the river in one piece back to the safety of the camp... at least until the next day anyway.

After our brief warm up, the following morning we went out in search of what Norway paddling is really famous for: Big Waterfalls! After seeing a couple of photos, and hearing tales of a tall, clean, curving, 25m or so Foss hidden away in Eksingedalen we were very eager to check it out. On the road we passed the famous Teigdalselvi Double Drop looming through the trees. "Perhaps later when we've practiced our boof strokes a bit more, eh.." Then the ever so slightly burly Lake to Lake drop, which I persuaded Eoghain to run from the top so I could drive all the way to the other side of the valley to fit the whole sequence of events in the camera frame. 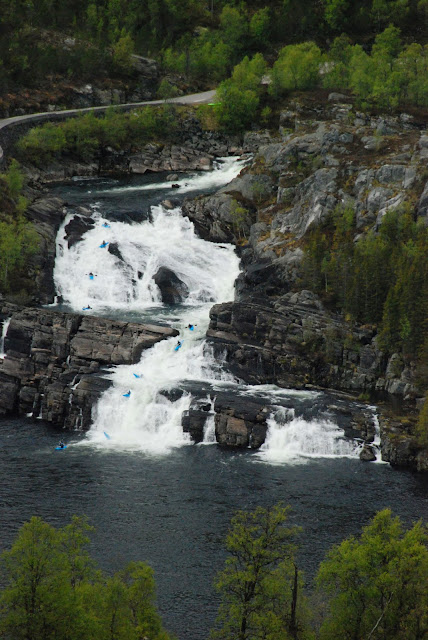 As we arrived at the bottom of Bergavatnet lake the loud roar and sudden horizonline at the end of the lake announced our arrival at Eksingedalen's Storeglupen waterfalls! With our hearts in our mouths we went to sneak a peek. 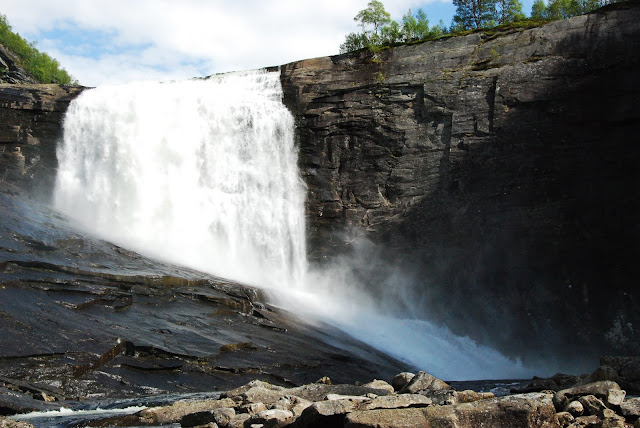 Yep.. so the first drop is certainly unrunable, unless you want to be scraped up of the solid rock landing below. The second drop also lands on a good pile of boulders, but it looked like there was enough curve to the waterfall to throw a good chunk of the water out into the pool... provided you got the line right. Too far right and its on the rocks... too far left and its into a dubious looking rocky corner pocket. Any easy run in though, means you shouldn't cock it up, so long as you make sure you remember where to hit the lip...  so after a bit of sliding about on the wet grass and rocks deciding this wasn't a really silly thing to be up to, we ran to fetch the boats and strapped on our helmets!

"Shotgun, going first." I called. Eoghain seemed quite happy with that, so after setting him up with his boat at the bottom for 'safety,' it was up to me to throw myself in and test the water... After triple checking I was sure which little waves to follow into the entry one last time. I strapped myself in, grabbed my paddle and slipped into the water.


Hmm it is quite high from up here.
I hope this is right.
In we go, nice and straight.
Drop.
Bounce.
Here we go!
Into the white.
Time to tuck up. 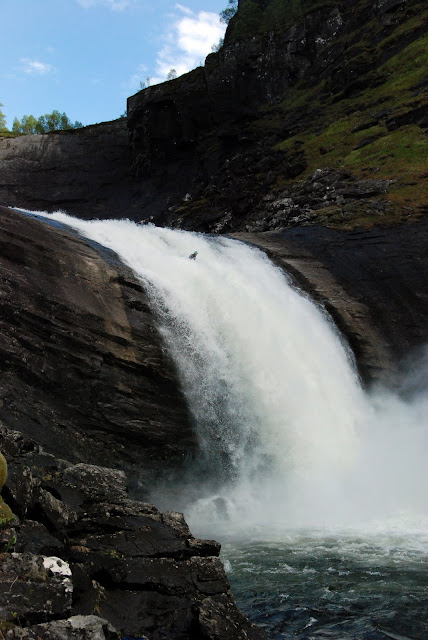 BUBBLES. Bubbles, bubbles
Time to roll up I think.
Woop! I'm out!
I hope Eoghain didn't cock up the photos ;-)
"Your turn mate!"
Sweet. We drag Eoghain's boat back up to the top. I stumble back down, Grab the throwline and camera and wait for him to appear on the lip. Hmm.. quicker safety or better photos? I opt for a compromise on a grassy perch just a wee scramble up the side of the gorge. 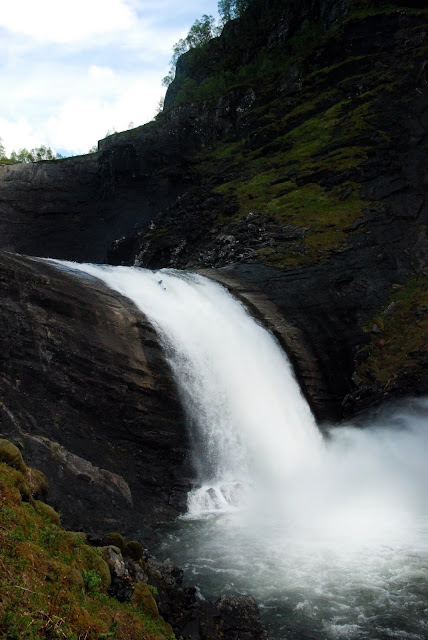 The waterfall kicks up a constant drizzle of mist that rains down on everything in the gorge even though the sky is clear blue high above. I struggle to set up the camera ready for Eoghain's descent without the lens quickly covering in dewy drops of water that make it impossibe to see anything through the viewfinder let alone focus on the waterfall. Suddenly the blue of Eoghain's helmet and paddle appear above the white of the lip against the black of the dark rock behind. Quickly, I pull the lens cover off, focus and open up a stream of frames before he disappears into the cascade of white water.
1
2
3
4 hmm.. he seems to be taking his time coming out.
5 where is he?
6
Aha. The bright blue of Eoghains kayak hull floats out of the mist into the pool.
Awesome. You can roll up now dude.
Suddenly I catch sight of a blue helmet surfacing behind his boat. Uh oh... Time for action! I scramble down as fast as I can to my boat and throwline. I hope he's okay! It's going to be a bit of a bitch getting out of here if he's done himself in.
"Are you alright? Are you fit?"
I shout over the river to where Eoghain is managing to struggle out of the water with his swamped boat... and what seems to be the remains of his brand new paddles. aha.
Eoghain replies with a happy laughing face and a cheerful shout of 'Yes!'
Phew. Thank fuck for that then!
Turns out not only did the waterfall break his paddle in disgust of his use of two blades, but it also made sure he was well told by also imploding his spraydeck. Ha ha. Sorry mate ;-) 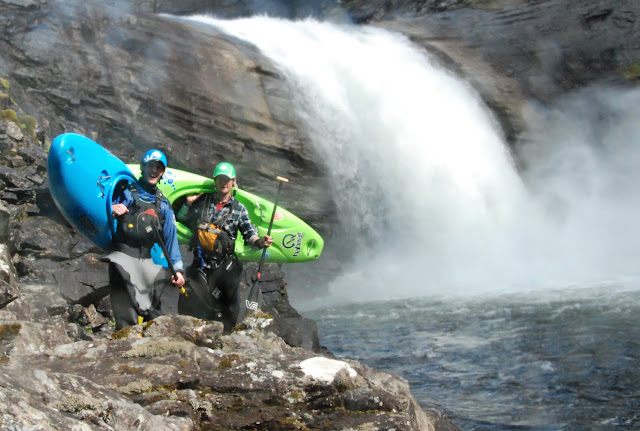 So.. what shall we do tomorrow?
Ben x
Photography: Ben McKeown
All content copyright.
Posted by the big blue tree at 10:38