Inbetween swims on the Moose River. 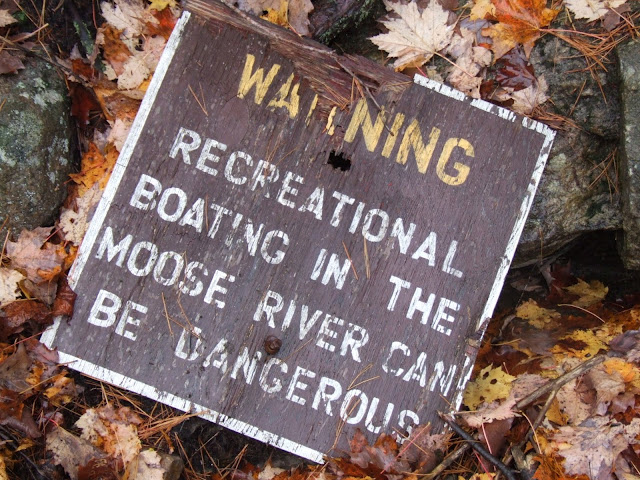 I have been in the US for over two months now and for the past year and a half I have been trying to think up ways to go paddling with my Canadian friend Matt. In fact, between Debs and I, we have devoted so much time to this topic that I suspect that if last years freshers ever actually meet Matt he will have a hard job winning them over! So when I heard about the Moose in upstate New York, I jumped at the opportunity to meet up and get on the river.

Eager for adventure, I set off to drive the six hours from Philly with Devin (an American friend of mine I met going to Gauley Fest). It began raining pretty hard about three hours in and it didn't let up. This made the idea of camping pretty miserable. On arrival we found ourselves without phone signal and only the name of the campsite Matt and his friends were in. The campsite turned out to be more of a small town (welcome to America) without a tent in sight. Disheartened, I was about to give up when the campsite owner came over and started to look through his list. I wasn't optimistic as he looked shocked when I suggested they might be camping with actual tents. It was at this point I noticed Matts note. To my relief they had bailed on camping and were staying in one of the many cabins. 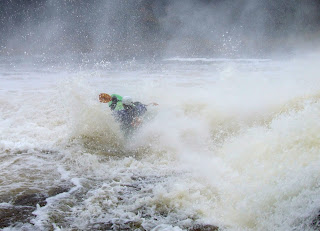 Matt spent his summer rafting on the Rouge, and had brought some of his buddies (Gab, Kyle, Chris and Fraser), two of which had brought playboats as well as the creekers which they had hired. Their reasoning was along the lines ‘I have never paddled a creek boat before.....I'm not sure I trust it’. It was at this point I started to get a funny felling that the next day might be interesting....

Standing in the makeshift car park at the get on for the bottom Moose that feeling had failed to subside. In fact it had grown considerably when a local friend of Devins who ‘knows the bottom moose like the back of his hand’announced that they were only going to paddle the first 4 rapids as the level was super high. Some clever sod then pointed out we were a group of thirteen which only helped lighten the mood.

Before I go on I would like to say we all had an awesome day on the river, but the following series of events read in a similar fashion to a disaster report.

Matt's friend Gab was bleeding before he hit the water (although there was only seconds in it), an altercation involving a paddle, a tree and a slide had set the pace for the day! The first rapid on the Moose is about 100m after the get on and really sets the pace. A big 50ft slide with a huge 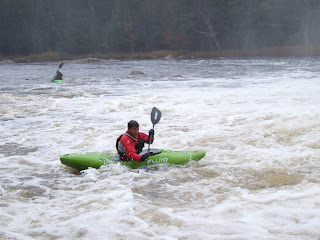 recirculating hole in the middle. For me the second run down spelled the end of my (almost) brand new AT2s. Fraser went a bit far right and when he re-emerged from the hole he was without his helmet. Apparently the buckle had completely unthreaded. I have to admit it was a little worrying to see a helmet floating around without a Fraser.

The next couple of rapids we relatively simple and gave me a chance to get used to the Werners Devin lent me. He bought them off some random guy for $15, they have a 90 degree feather and totally symmetrical blades. Although I am sure they didn't start that way.

At the end of a big flat section we came to some big signs saying PORTAGE. On inspection it was a dam leading into a slide which didn't look too bad. After some persuasion by Gab (who had never been in a creek boat before) we decided it was worth a run. It was! It turned out to be a nice slide and everyone ran it ok. However my brand new habitat had a small disagreement with a rock when I seal launched back in from the side, denting the nose. This left me wondering why I had failed to listen to my own advice (AT2s break and all habitats, apart from Ben's, have dented noses). 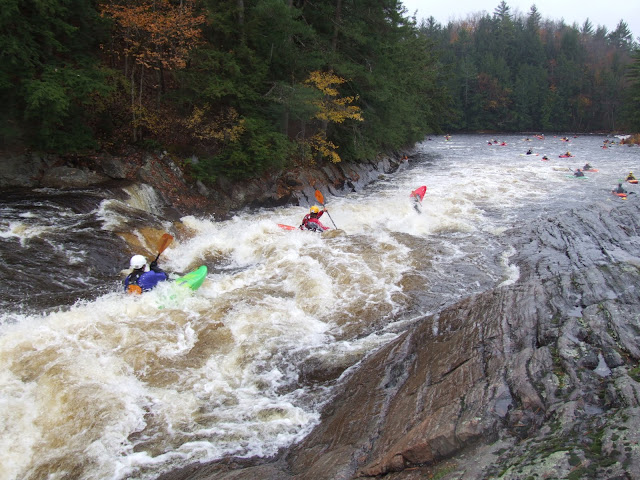 Agers falls, a clean 20 footer with a big run out, saw Devins local friend swim and his group walked off muttering something about a broken dam releasing loads of water and some serious rapids. Keen to get the full Moose experience we pushed on. Some way around the next corner we saw an awful lot of boaters on the side and no one in any boats. On inspection it became clear what the locals had meant. Sureform, a big 60+ ft slide, looked pretty serious. Chatting to some Moose veterans the only info I got was that none of them had ever seen it look so big. 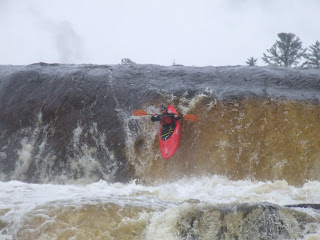 I was totaly unsure if the line would work at all, but after watching a playboat go down completely off-line I decided it was time to man up. Pushing through the lateral wave at the top I was faced with water coming from all directions, but before I knew it I was being spat out the bottom. Matt followed taking a super clean line with a huge grin at the end. Fraser followed but got flipped on the first lateral. From the bottom I couldnt see anything other than occasional flash of green from his boat. At the bottom is was obvious that he had run the whole thing human side down, and everyone was so relieved when he rolled up. His helmet had taken a total beating, the paint was chipped off most of the top, and between the vents the plastic had cracked. But it had done its job.

It was Christian's turn next, and 'Power line' delivered his opportunity to take a dip. Some swift throw bag work had him out but his boat had gone down stream and was pinned under an undercut. Some more clever bag work had the boat back in the flow and on a line. Well, that was until the line snapped and the Villain ran the worst possible line down the next big class V.

The final rapid, Crystal, looked big and scary, but confident that I had it under control, despite the 90 degree tea spoons, I decided to go first to take photos. In my defence I got the line fine and was only capsized by a wave at the bottom. Nine or so roll attempts later this didn't seem particularly significant. No matter what I tried I couldn't roll and I had no idea what was coming next! Thankfully when I emerged I was in a large pool (a good 100 ft away from the next dam) and some friendly boaters were there to witness the dent in my pride which now accompanied the dented boat and broken paddles! 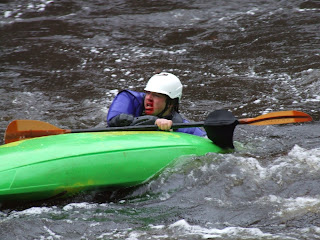 Matt once again styled the line only having a cheeky roll at the end. Devin, on the other hand, had a much more interesting line. This apparently involved a minute of being worked, a capsize between two of the drops and running the final drop distinctly human side down. All I saw was a bloody face drifting by clutching a boat and a paddle. I was on hand to help and dutifully took pictures of him as he drifted towards the dam.

All in all it was the most incredible weekend, which reminded me that we are all in between swims. Also on a positive note WRSI are sending Fraser a new helmet for his troubles and AT are replacing my paddles! 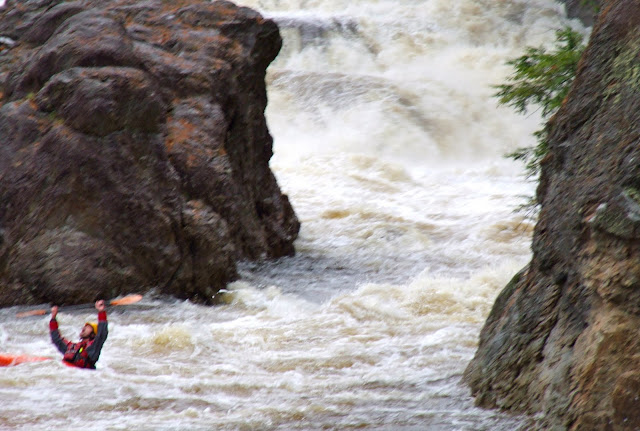