Continued from Part One.

After a spectacular camp high up on the side of the valley with the curious Kea, one of which woke us up in the middle of the night as it crashed into the side of the tent, we woke up to begin our final descent to the river. The snowy summit of Mount Aspiring was bright and orange above us, Kea were still buzzing about overhead, and in the early morning light we managed to walk upon a Chamois having his breakfast.


After half an hour or so of descent through the mountain herbs and grasses, the vegetation gradually got taller and thicker, and before long we were amongst the ferns and mosses under the shady canopy below the treeline.


It was a few hours of battling with the undergrowth before we eventually emerged out of the bush at the bottom and into the bright sunshine on Bonar Flats.


Honza was a bit surprised to find that everything looked a bit different from the last time he was here two weeks ago. The river bed was wider and there were huge tree trunks jammed all over the place. It turns out a huge landslip had occurred up into the glacier lake a fortnight ago and sent a huge torrent of water down the river, wiping out good chunks of native forest, and moving some considerable sized boulders about. We would have to be on our guard for log jams and boulder chokes when we get on the water...

After a bit of a scramble downriver over the bouldery river bed and through some flooded bush we arrived with relief at our big pile of gear! Awesome, the Kiwi heli magic had happened whilst we were walking in. We had a fresh supply of food and the equipment to float out of here. After quite a bit of faffing about inflating the raft, we packed away our walking gear and food into drypacks, got into our wet gear and launched out into the cool grey glacial water of the Waiatoto...


It was refreshing to be on the water, especially during the afternoon heat. After a few hours of cruising down some easy rapids avoiding the fallen trees we arrived at Drake Flats and set up camp for the night, and brought in the New Year with a few boxes of wine and vodka around the campfire. 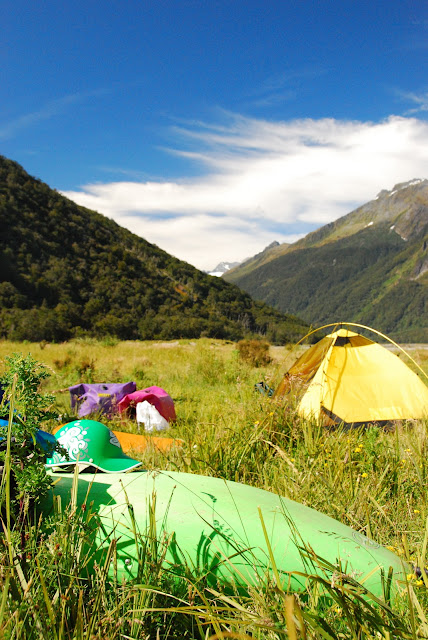 Day Five:
The first day of 2012, a little bit hungover. A couple of hundred meters below camp the river narrowed and we hit our first taste of proper white water for the day. A nice bit of rafting carnage was thrown in as people were thrown overboard going through the first hole.

All ended well though, with everyone rounded up in the eddy below, before floating down the gorge to the next rapids. 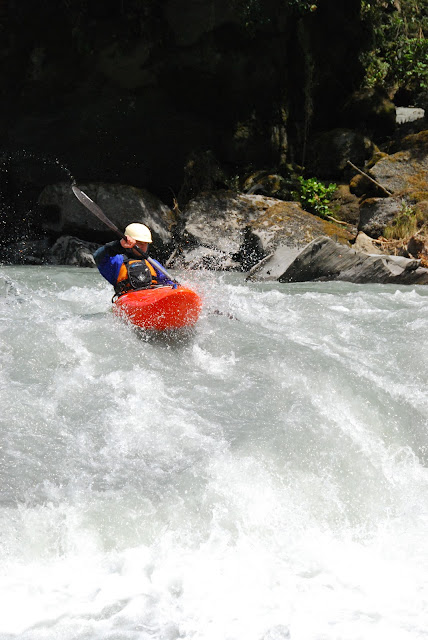 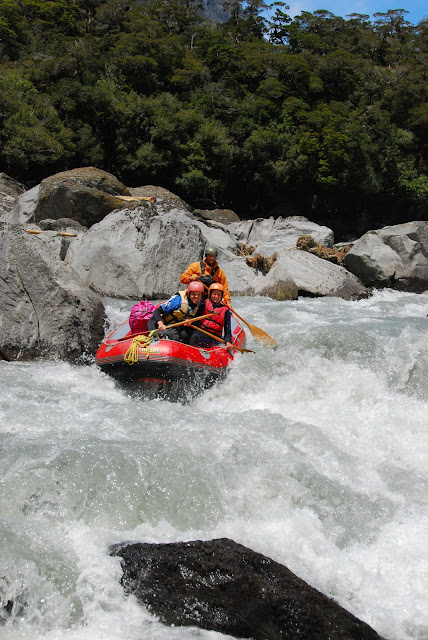 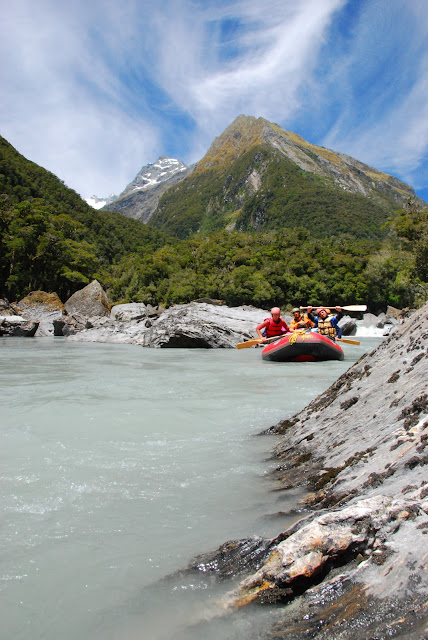 For the rest of the day technical boulder gardens broke up fairly long stretches of flat where the wind blew clouds of dust up over the water. In the late afternoon we arrived at Axius flats where the clear blue water of the Te Naihi river flows in, swirling and mixing with the milky grey water of the Waiatoto. It was nice to take off our paddling gear and wash away the dry dust and silt by swimming in the clean cool waters of the tributary. We set up camp and relaxed in the sunshine. 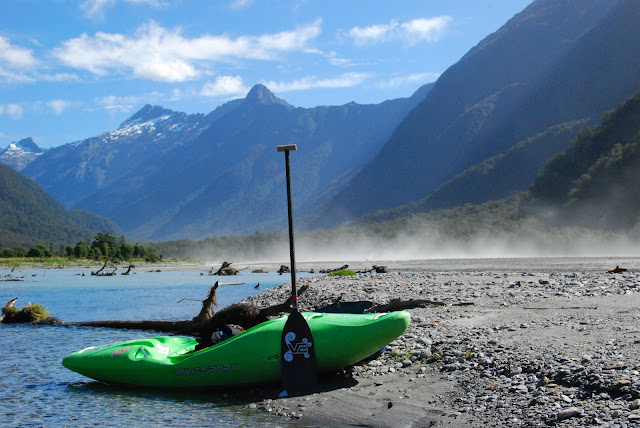 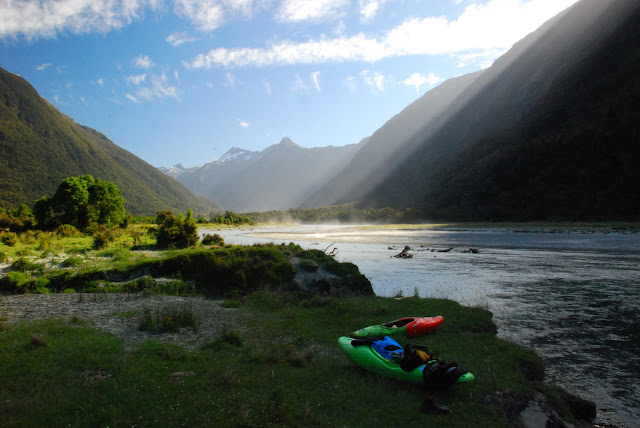 We had a fun last night by the river, where eel fishing and awesome scenery did a good job of distracting us from the hellish Sandflies. I was grateful this was the last night out in the tents as I was quickly coming to the very end of my insect repellant supply. 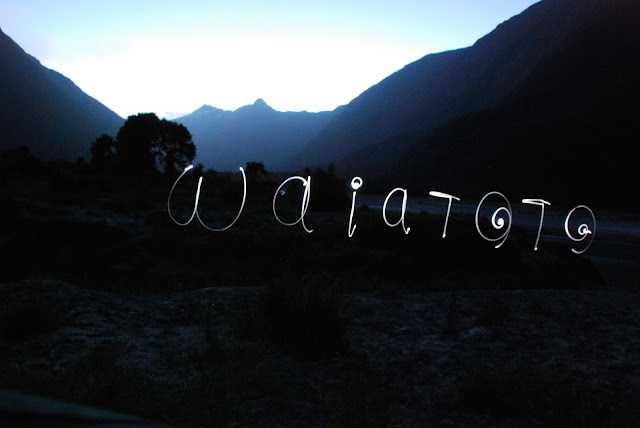 
I woke to the what sounded like the pitter patter of rain on the tent. Oh no, not a wet rainy day!? Nope, it turns out it was the noise of thousands of sandflies buzzing about underneath the tent flysheet. Urgh. I was glad when we eventually got the camp packed up and could escape to the safety of the river.

We paddled some fun rapids on the last day as the river made its way out of the mountains. The last few miles were pretty tedious on the meandering flatwater, and as we paddled round the final bend the view of the road bridge, our take out, was a very welcome sight! But what an amazing adventure! I'd thoroughly recommend a mission down the Waiatoto if you get the chance.

Back to Wanaka for home cooking and cold beer! 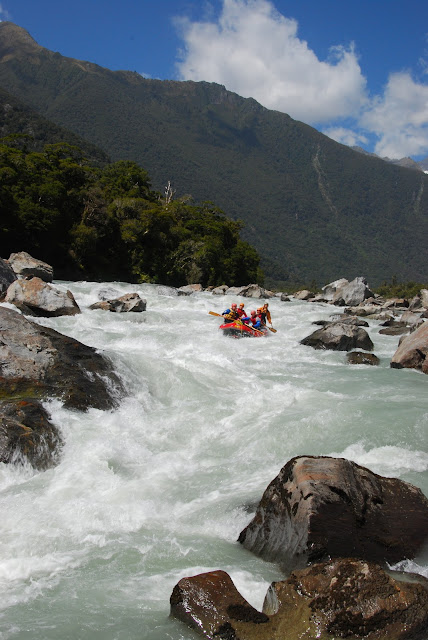 Waiatoto Adventure!! (Part 1: The Walk In)

Everything here in Wanaka NZ was gearing up for New Year. Rachael was getting ready to be super busy with work, serving food to the hungry celebrating mob late into the night. I on the other hand found myself at a very loose end - work was finished for the festive season and with my adventure buddy busy I was bit reluctant to spend money on fuel to go exploring by myself. I was a bit frustrated and even sat down to write a essay for the site on the environmental ethics of heliboating (or something along those lines). How boring. I needed an adventure!

Now, as if fate had all this set up, I found out that very day that Jan 'Honza' Svoboda the Czech rafting guide we had recently met was heading this way to take a group on a week long adventure into the wilds of the Waiatoto river. The Waiatoto begins its journey from the melting ice of Mount Aspiring's Lower Volta Glacier and carves its way through jagged snowcapped mountains and wild bush to the sea at Jackson Bay on the West Coast. Having read the description of the river in the Whitewater New Zealand Guidebook back in the Scotland during the impatient lead up to our trip, when Jan turned up at the door and asked if I wanted to come along to 'Safety Boat' I didn't think twice and jumped at the opportunity.

However, it turns out we were not going to all be taking a helicopter ride to the put in like most groups. The boats would be, but not us poor people. We were going to have to earn our whitewater by walking in through the hills and bush from this side! From the Matukituki valley over Rabbit Pass and Pearsons Saddle... 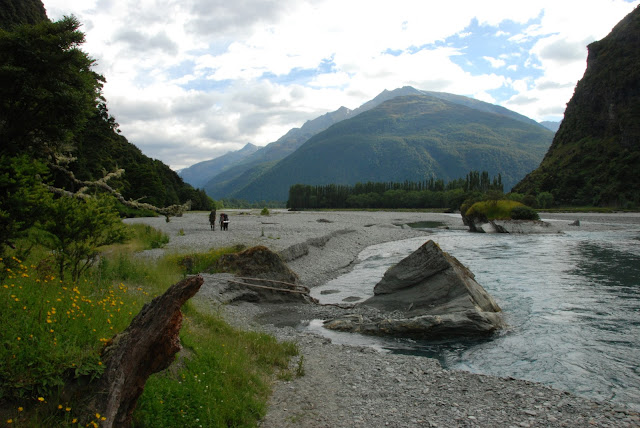 An early start from the house in Wanaka, we drove up the dirt track towards Raspberry Creek and the upper Matukituki tributaries. Here we shouldered our packs and headed up the East branch of the Matukituki River towards Ruth Flat where hopefully we would find a small emergency cabin that we could eat and sleep in, hidden away from the sandflies and incoming rain. The day began with nice easy walking to begin with over wide alpine pasture beside the river. This gradually led us into some cool native beech woodland where the walking got a bit more tricky up and over roots and streams. It was a fairly cloudy day but it was sweaty work on some of the steep hills and climbing over fallen trees where recent landslides had washed out muddy rocky strips down the valley side. Eventually towards evening we arrived back at river level, and after an easier stroll up the beside the pebbly stream bed we arrived at our first camp spot: a tiny tin cabin that must have been helicoptered into the valley and left for emergency shelter. 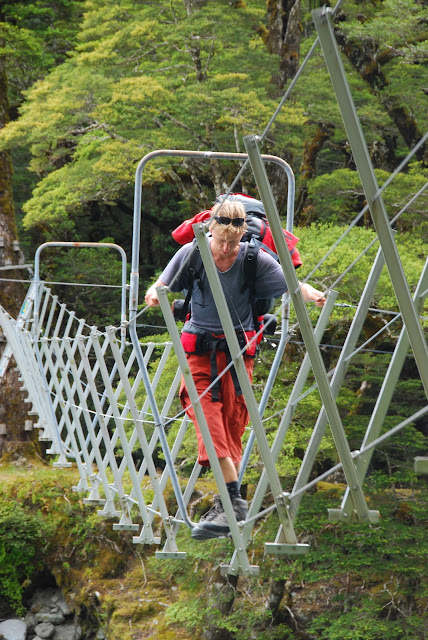 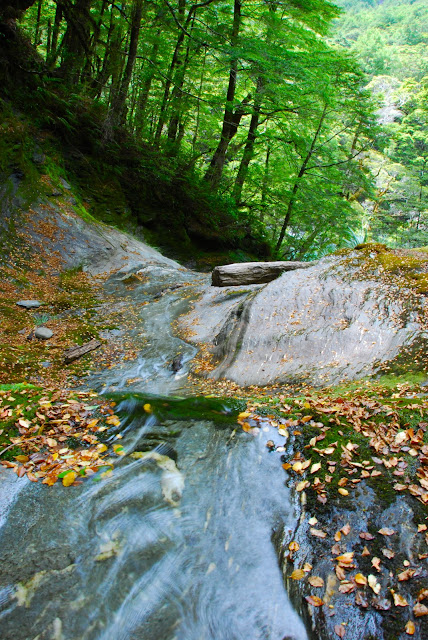 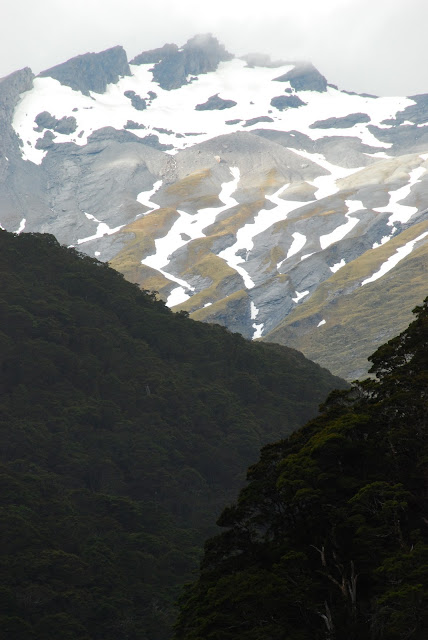 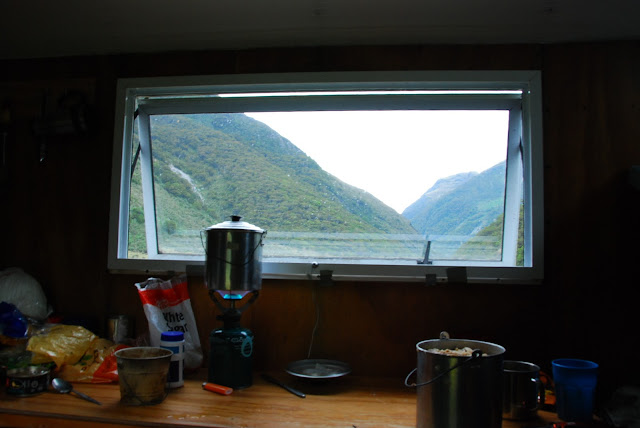 Another even earlier start today, after a cramped nights sleep in the Ruth Flat Cabin. For the first hour or so we walked up the river, or rather in the river which was quicker and easier than the thick vegetation on either bank. I opted for bare feet as I couldn't face walking the rest of the trip with wet boots. Luckily my feet have hardened quite well thanks to my 5.10s falling apart not long into our NZ adventure and the price of shoes out here. 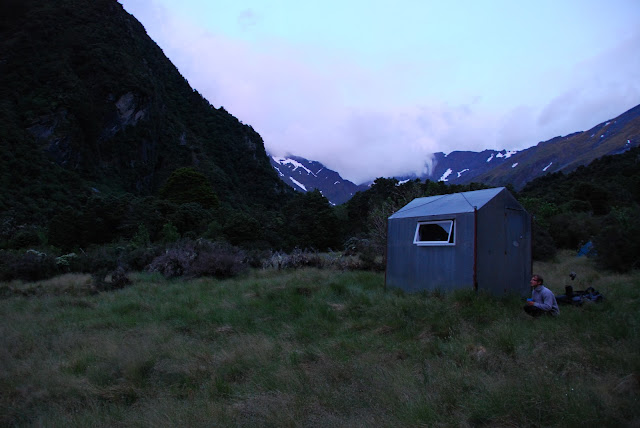 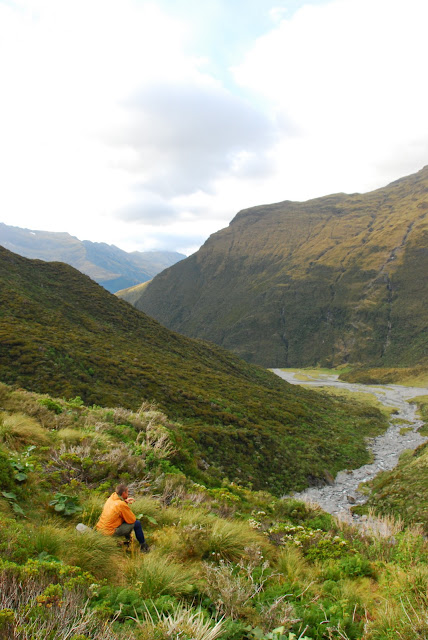 Once we reached the top of the stream things quickly got steeper and rockier, and I found out why a lot of the mountains and awesome looking ridges around here are not climbed very often. The rock is horrible! Slippery, loose and brittle. Like climbing a mountain of Walkers crisps. 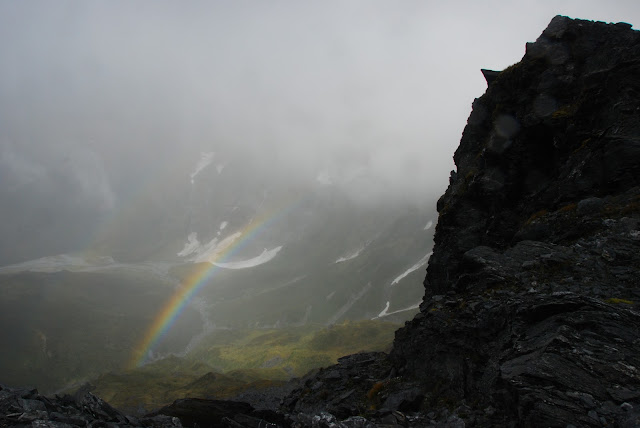 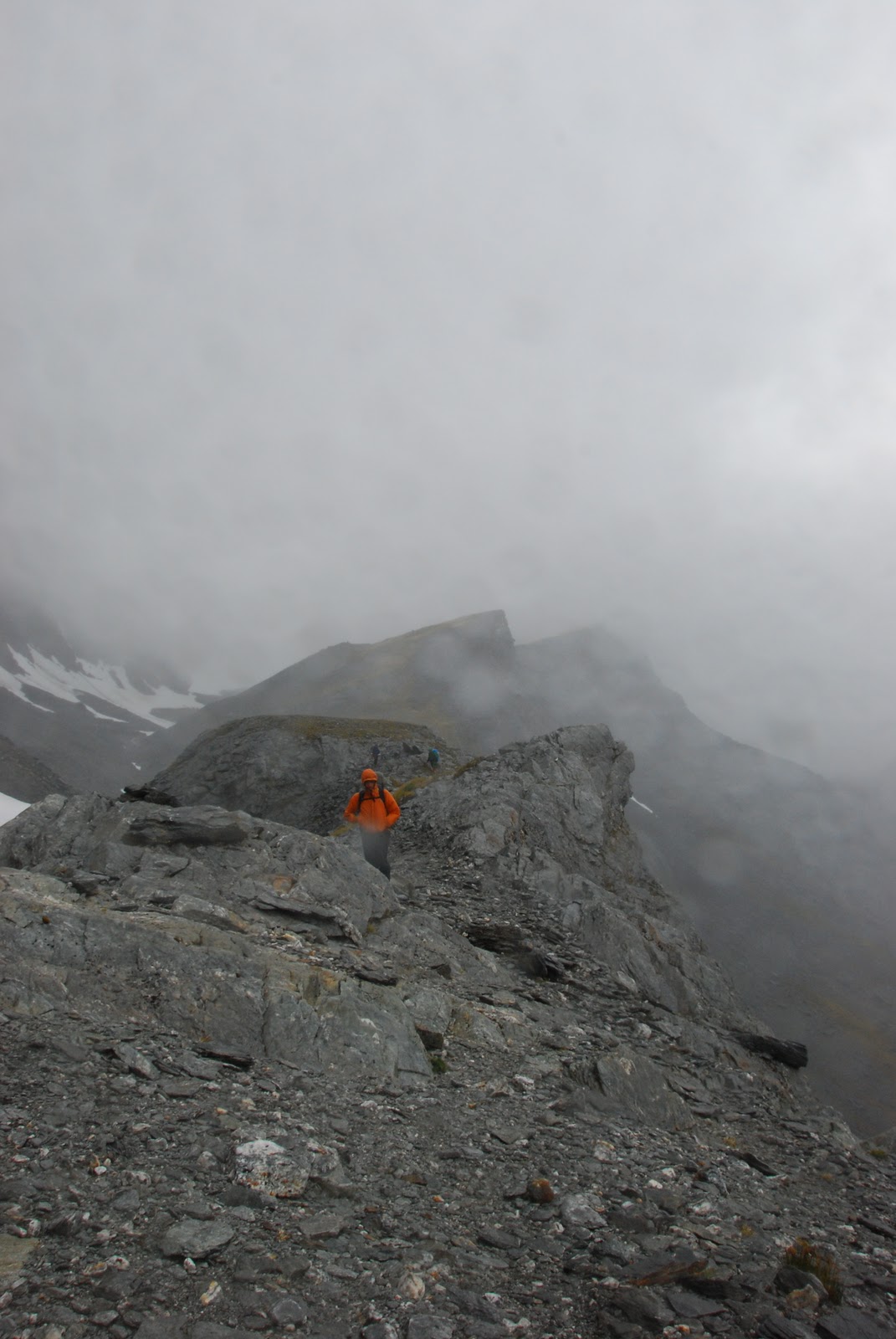 After scrambling up into the pass, things were wet, cloudy, cold and windy. We huddled in the lee of a boulder for some lunch and decided to find a good campsite up in Pearson's Saddle to hide in the warmth of our tents and sleeping bags and wait on the sun coming out...

Roughly twenty-four hours later at 2pm the following day, after munching most of my Whittaker's berry and biscuit chocolate, starting and finishing my book for the trip, and lots of sleep, dosing and thinking, we stuck our heads out of the tent and saw patches of blue emerging through the clag, and brief glimpses of snowy mountains around us. Time to get up, and get out of here!


So we do and as we descend from the Saddle the awesome views open up around us. 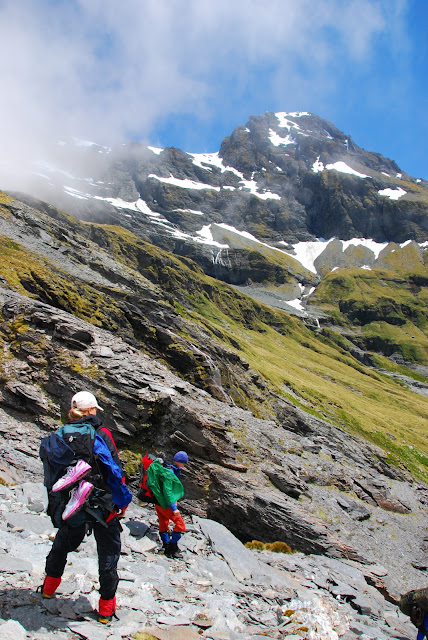 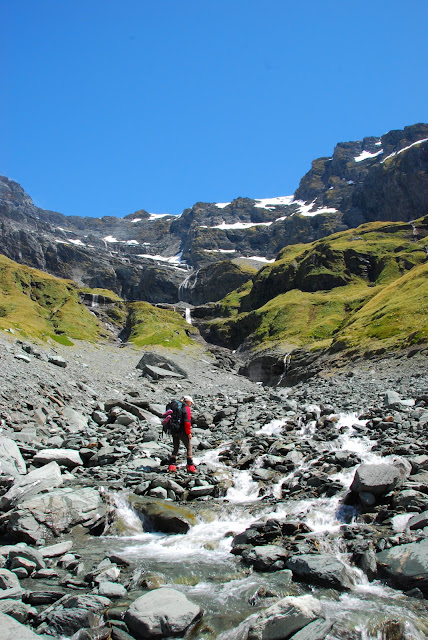 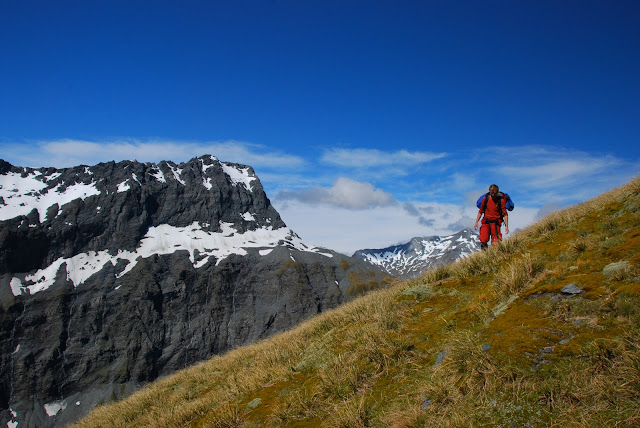 After a few more long steep ups and downs the Waiatoto River appears! 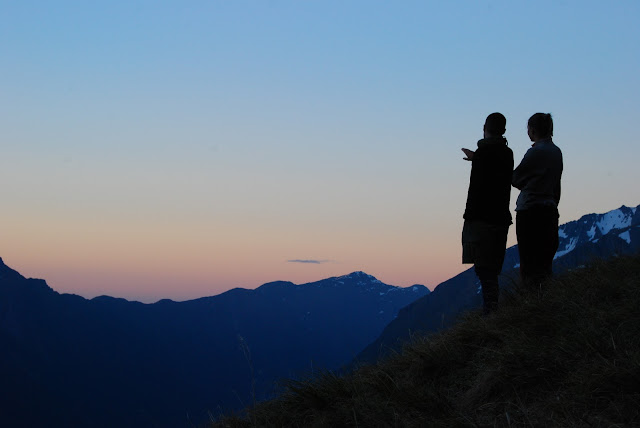 Tomorrow, just a wee walk down to the valley bottom where (hopefully) our boats, raft and gear should be waiting for us...
To be continued...
Posted by the big blue tree at 17:26