For the last couple of weeks I've been cruising around the Highlands of Scotland in the van making the most of some time off and the snowy weather. After parking up in Wester Ross, my hopes of getting up some wintery hills with views over Inverpolaidh were spoiled by incoming rain. Lots of rain. As usual, when the rain arrived so did the flood of texts from paddling mates. One stood out from the rest.

Sent from my friend Dave Maltby in Edinburgh.

Hmm. Paddling huh? I'd not really been overly enthusiastic recently about getting out on the water. Not in this country anyway. Maybe somewhere far away where the sun is still hot and the water not so cold. But the Ossian! I'd been hoping to get on this trip since I'd first heard about it. A little paddled river that emerges from the remote heathery bogs of Rannoch Moor. From Loch Ossian, the river emerges small and meandering at first before picking up the pace as the gradient increases and more tribuatries add to the flow.  The river relaxes for a bit in Loch Ghuilbinn before it is reborn as the Abhainn Ghuilbinn which steps up the gradient and volume of whitewater as it carves its way down the wide glacial trough of the glen into the Loch Laggan reservoir at the bottom, and on into the River Spean.

Sounds good? Why haven't you paddled this river yet, I hear you ask?

The catch is, there is no proper road to the get on. The most straight forward way might be to lugg your boats up the rough land rover track for the 15 or so miles to the end of Loch Ossian. Or by being very nice to the folk at Fort William train station, get your boats in the Guards van on the last train out of town, the 7.50pm sleeper to London Euston, and hop off quickly at the lonely station of Corrour on Rannoch Moor. Find somewhere to sleep. Carry down to Loch Ossian, and hopefully with the wind behind you paddle for an hour or so from the top of the loch to the river at the bottom.

Another problem is the river requires a fair bit of water and so is rarely in condition during the summer when there is warmth, daylight, and the Corrour Youth Hostel is open to escape the fierce midges.

And so it was that I found myself giggling out of breath with Nick, Debs, Dave and all our boats in the guard's carriage chugg chugging out of Fort William station in the darkness of a cold wet January night.

Getting the boats on the train turned out to be a bit of a panicy rush as we spent a little too much time sorting ourselves out in the carpark, but we managed to venture in with only a few minutes before departure.

The guard asked us how big the boats were.

I said they will.

And they did... just about.

Dave and I managed to maneuver our two boats into the bike compartment of the carriage, with two minutes before the train was due to leave. As the guards shut the doors behind us, that was when Nick and Debs appeared on the platform with two more boats. People were not impressed. Especially when we realised that Nick's van had not been locked up and I had the key on the train. Many thanks to the folk at the ticket office for locking it and looking after the key until our return. We owe you one.

Phew! We were on. All four people, four boats and four paddles. We made our way to the comfortable sleeper train seating and enjoyed a pint of Deuchars each from the onboard bar. After a comfortable hours traveling, we pulled up at Corrour Station and slid our boats out into the windy darkness of Rannoch Moor.


I didn't sleep very well. If at all. After the beer on the train followed by a couple of bottles of Inveralmond Brewery's Ossian beer, it wasn't long after getting into my cosy sleeping bag that I needed to take a trip outside. I didn't want to go outside. The powerful wind screaming past the door of the little wooded shelter all night didn't help a good nights sleep either and made me frett about our long paddle across the loch in the morning.

But morning soon came and we emerged to a fairly decent day. The wind had calmed down and it wasn't snowing or raining. We ate breakfast, packed up camp into the boats, and set off down the track to Loch Ossian. 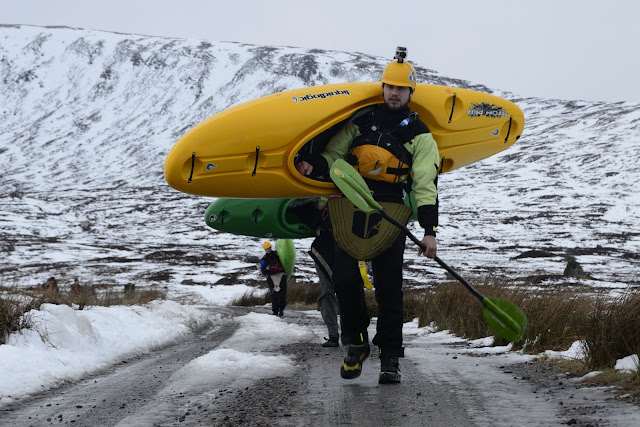 The loch was a bit of a mission to be honest. It would be a pleasant paddle in an open boat on a warm clear day, exploring its little islands. But in small creek boats in January, even with the wind behind us it was a tiring mission. But we endured and made it to the far end where the slightly sinister looking glass towers of the Corrour lodge house guard the loch's outflow, and our entry into the river. (Perhaps I've been reading to much Iain Banks or Stephen King). 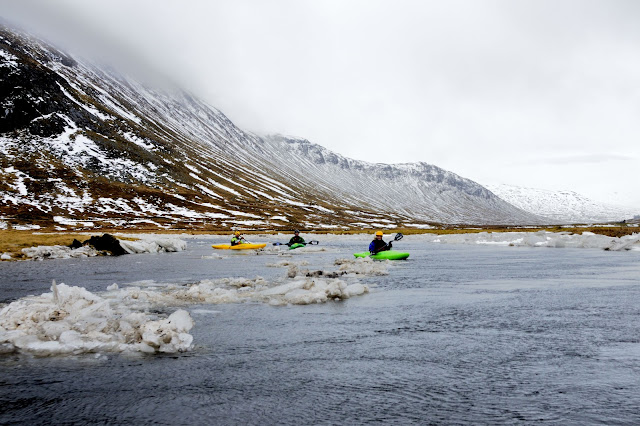 Paddling down the Ossian was a delight. We had to portage and duck under a couple of fences early on but the river was a fun level and we bounced down some fun wide rapids all the way to Loch Ghuillbinn.

Well almost all the way...


Whilst paddling down we had enjoyed floating along with mini icebergs and sheets of ice that had flowed down presumably from Loch Ossian. We guessed that they would probably just collect in Loch Ghuilbinn. Little did we know that Loch Ghuilbinn was covered in a thick layer of ice, and that all the ice flowing downstream to meet it couldn't float any further and was backing up the river. The river wasn't flowing too powerfully here but it was still a bit disconcerting to watch the flow disappear under the piled up ice sheets. It looked like we would have to drag our boats overland for a bit.

By the time we got round the ice we were good and warmed up again, had a bite of lunch and headed off down the Abhainn Ghuilbinn. The river started off pretty chilled, much like the Ossian, but we knew bigger rapids awaited, and soon we were upon them...

Dave led the way, having paddled the river earlier last year. I stopped for a minute and sorted out my boat outfitting as I knew the first steeper rapid was coming up. When I was sorted I floated on down to see that Dave and Nick were already at the bottom of it.

"Cool. It must be fairly straightforward then."

Dave signaled to head river left. Debs indicated to put in a good boof stroke from the bank. So I headed down. A little too left. Bashed a rock and pretty much just fell, with no momentum, into a nice big hole, which bounced me around for a nice while under the cold water. I didn't feel like I'd be coming out of it anytime soon in my boat, so before I ran out of breath I pulled my deck, struggled out of the boat and had a very, very cold swim clutching the cold metal grab handles of my boat. I felt the icy streams of water seep into my no longer one-hundred percent "drysuit". The ice-cream head was killer!

After the initial adrenaline rush, and relief to be safely on the bank intact and reunited with boat and paddle, I soon felt pretty cold and drained from the whole experience. I enjoyed eating some good chunks of chocolate and ran about a bit to warm up before venturing back on the water.

After that the drops, although mostly flowing into good pools, seemed to steadily build in technicality and pushiness. After cocking up that last drop and now feeling pretty cold and tired I opted to walk around most of them taking photos of the others having fun. One of the rapids, that I talked myself into sorting myself out for and running, didn't go well either and I spent some more time upside down in the head numbing water above a pretty unfriendly drop.

The rapids are awesome though! Especially in the decent flows the melting snow gave us.

By the time we made it back to the warmth and safety of the the van, where dry clothes and warm soup awaited us, I was knackered. However, now that I'm warm and safe in the house by the roaring fire with a cup of tea, I'm kind of looking forward the next time I can get out there. I know the lines now... I'll show it what for ;-)

I'll definitely be waiting for things to warm up a bit more first though.

Story and Photos by Ben McKeown.
Posted by the big blue tree at 09:25