A lovely time with the big bad bears and monsterous moose.

“And whatever you do, don’t venture up the Upper Bowron River” the lady ranger said, concluding her pre-trip talk.  “You really don’t want to go there; there are a LOT of grizzlies up there.”

I gazed around at the five other people in the room.  Some looked non-plussed – meh, bears, whatever - others excited for the upcoming circuit (Ben). I gulped. So we have to remember that camp 31 is always under water, and to be careful not to overturn in the eddying currents on the Caribou, and to check we’re alright to run that rapid called The Chute. Oh, and moose will come through our camp but apparently that’s fine, and on the portages remember there may be bears.  Don’t forget the bears…

I suppose the lead up to my first Canadian wilderness experience was going to be wrapped in typical Haylett worry. We were about to embark on the Bowron Lake Canoe Circuit, a one hundred and sixteen kilometre, week-long trip, paddling almost a perfect parallelogram of lakes and rivers to end up back at the welcoming shores of Bowron Lake itself. 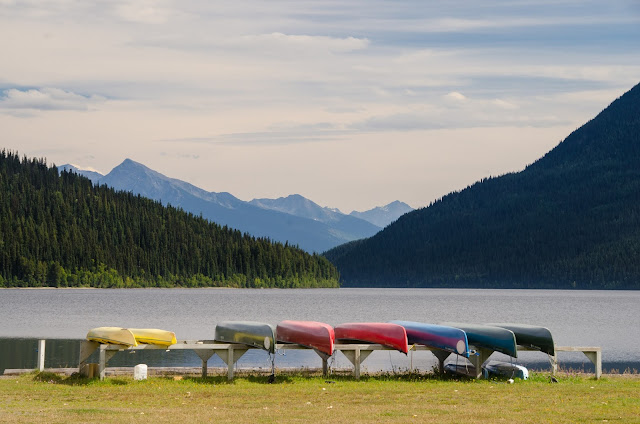 It was time to embark.  “Don’t get too put off by the first day”, Ben said as he lugged his rucksack onto his back.  “Today will be the day with the most portages.”  A young couple had already begun trundling their canoe down the path into the woods, sunlight streaming through the leaves.  Good, I thought.  They can scare the bears away.
We’d started off in the afternoon, so it was a short day’s portaging and paddling.  Our first lake was Kibee Lake, deep green and surrounded by bright yellow marshes in the summer light. After another pot-holey, leg-bruising portage we reached Indianpoint Lake, where the mountains surrounded us in green grandeur and the lake glowed blue.  Fish followed along our canoe – too many to count – as we paddled alongside the northern shore, little campsites sheltering in the trees with little orange signs to show canoeists they’re there.  Another portage, and we were on brilliantly blue Issac Lake, with a campsite all to ourselves and enough sunshine left for that swim I’d been longing for all day.  Bikini weather until well into the evening – yes, this was the summer we’d missed in Scotland.  We were tucked up in our tent just before it got dark, both wanting to prevent our imaginations running away from us into those mysterious black woods. 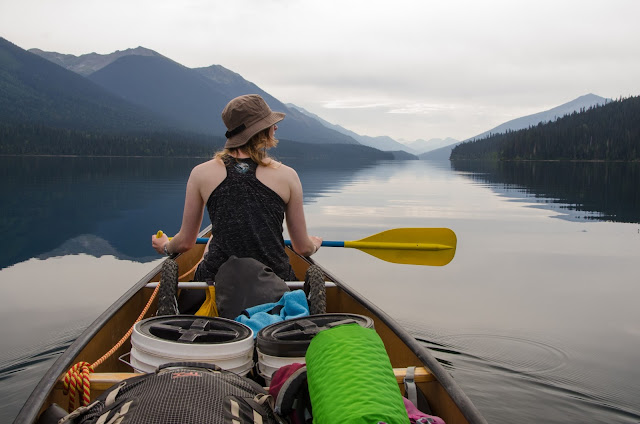 Out of five nights camping, we had four campsites to ourselves.  Evenings involved simple cooking, the melting of chocolate over campfires to make smores, reading, and a lot of sheltering from the wind.  The first few days of paddling were pure Canadian summer, with our pale British skin on show for miles, desperate to soak up vitamin D.  Then the season changed.  One day it was summer, the next autumn had set in, with grey skies, pockets of passing rain and that wind.  That wind was great when it was helping you along; not so much when you were battling against it. 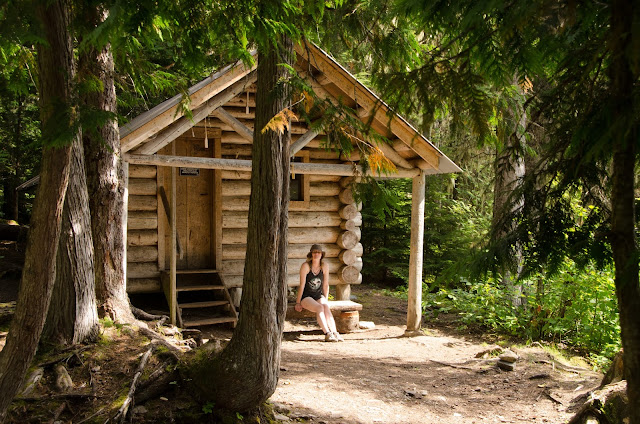 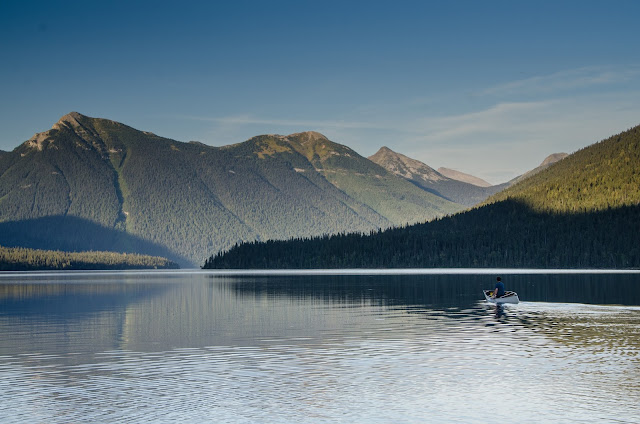 It was on the morning of our second day we saw a bear.  That elusive creature, so tied up in my fearful imagination, had swum across the lake ahead of us and was busy making his way along the shore.  We stopped and stared at one another, interested, and I was in awe of this beautiful black furred creature.  So innocent, so wild.  Why was I so afraid? Isaac Lake was the longest lake on the circuit, and waiting for us at the end was the famous “Chute” – the only rapid on the circuit as the lake flows into the Isaac River. It was one of the areas where people bunched up – after a day of paddling and hardly seeing a soul, suddenly everyone was there, enquiring: “will you paddle it?  Or will you camp here and wait ‘til tomorrow?  Awesome, we’ll be there to watch and take photos!”  Wonderful.  An audience.  I looked at Ben, the canoe master, chief manoeuverer.  “Er... What do I do?”  He gave me a typical Ben stare, always used when I’m worrying about something stupid.  “Just do a cross-bow rudder when I tell you to.  Don’t worry, it’s not even really a rapid!” And he was right.  Easy peasy, another thing that had been preying on my mind had been crossed off the list. 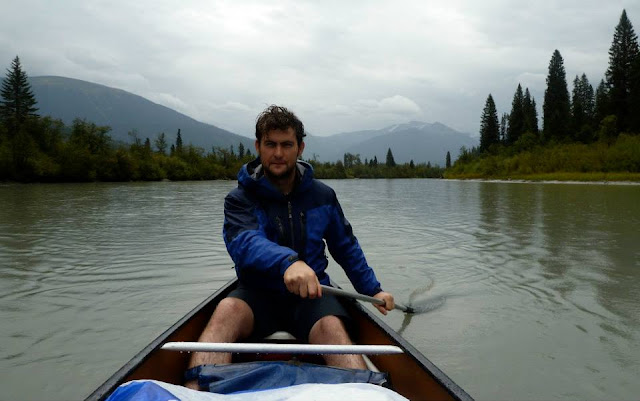 The next few days passed in various shades of colour: the murky brown of the Caribou River, the misty grey of the surrounding mountains, and the moody teal of Lake Lenazi.  The rain seemed to follow us, finally abating for a sunny afternoon on Sandy Lake, and a chance to dry out.  The wind, of course, remained, and made for a noisy night in the tent.  As we lay there listening to the rattling, I thought I’d rather this than hear squirrels in the bushes and think it was a hungry bear. 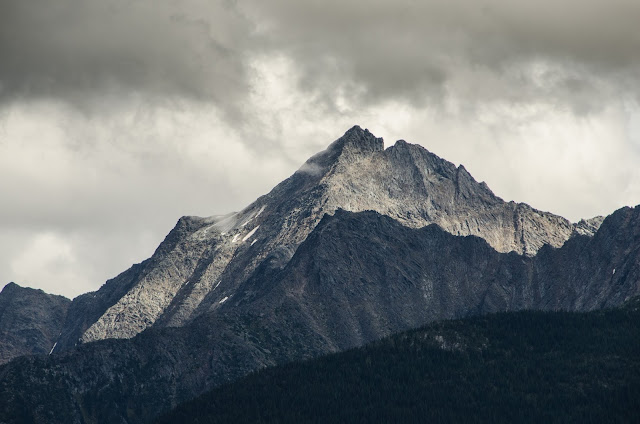 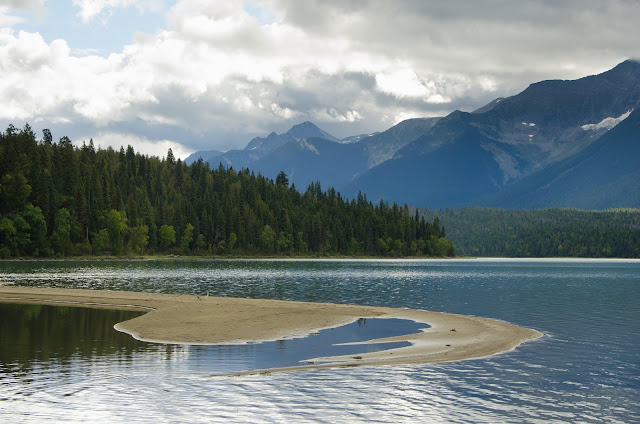 On what was to be our final day paddling, we set off early and saw two moose ahead grazing on a grassy island.  It was a mother and her calf, and as we passed by mummy moose looked up and thought where we were seemed like a good place to be, so she led her calf across the lake, and we made sure to move out the way.  Moose are huge, and she was not to be reckoned with.  As we paddled into the Bowron River, we hoped to see beaver, but they hid from us.  We had to accept we couldn’t be everywhere in the early morning. 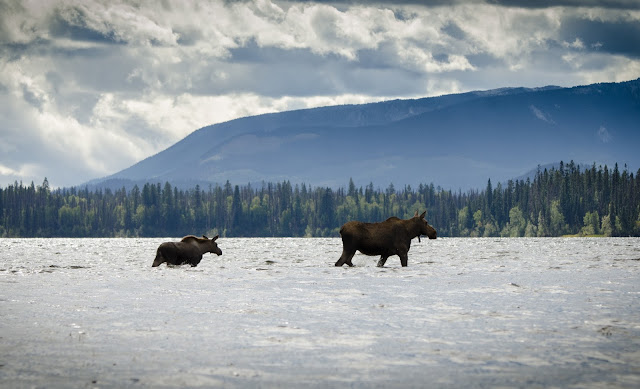 As the Bowron River meandered its way towards Bowron Lake, we passed another couple headed in the opposite direction.  “Hey!” he said in a loud Canadian voice.  “Looks like a storm’s a-comin!”  We smiled awkwardly and looked behind us.  Yikes, where did those clouds come from?  They loomed threateningly behind us, and thunder began to rumble.  We thought of the bonnie log cabin we’d left an hour or so previously, where that couple were no doubt headed, and grinded our teeth.  Rain started to ripple the river.  We looked at each other and shrugged.  We’d already made our decision to finish.  Time to put some real effort in and beat the storm.  We paddled hard, and I had to laugh.  The grand finale of the trip – avoiding being struck by lightning.  We left the river behind and began our paddle north up Bowron Lake.  The wind picked up.  I glanced behind me at the sail Ben had created, using two large sticks of wood and a Scottish saltire tarp.  We nodded at each other and I picked it up.  The wind pushed us faster up the Lake.  “Am I going to get struck by lightning?!” I asked, wondering if this was a stupid idea.  “No,” Ben said.  “The storm is moving west – we’re going to beat it!”  And so we sailed to Becker’s Landing, where we landed and were applauded by four ladies who had finished not long earlier.  “That was impressive!” one lady remarked.  “Yeah, we beat the storm!” I exclaimed, slightly overwhelmed at the thought that our canoe adventure was over.  We gazed back down Bowron Lake, it’s mountains enclosed in angry storm clouds. 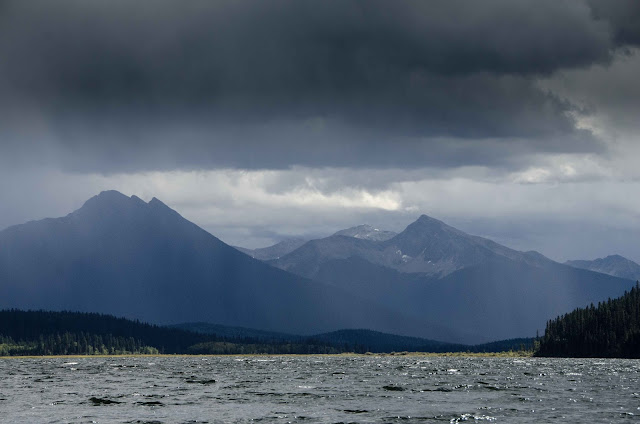 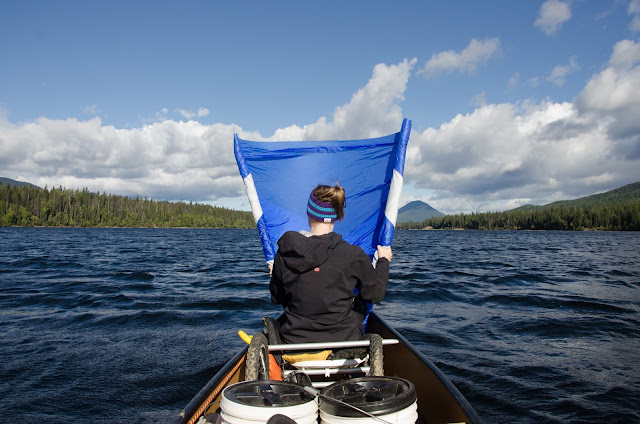 As we unpacked the canoe and cleaned it out, the lady ranger who set us off appeared to empty the bins.  “Hey, I’m sure glad you’re back already,” she said.  “There’s snow forecast for tomorrow!”